Your preference has been updated for this session. To permanently change your account setting, go to My Account
As a reminder, you can update you preferred country or language anytime in My Account
Email a Friend! 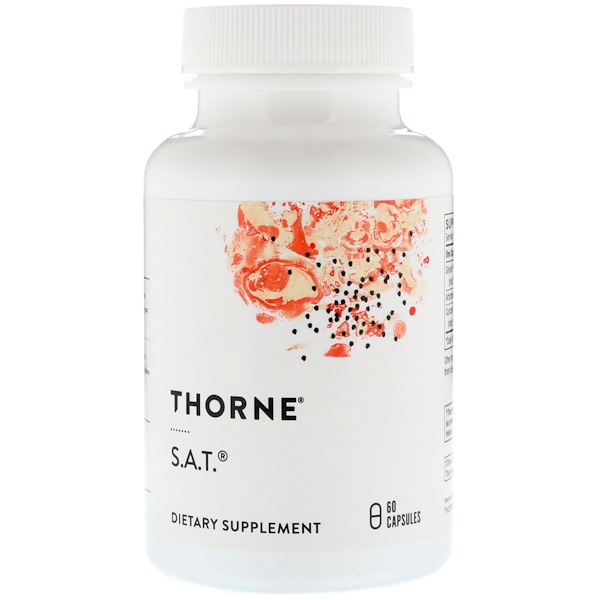 A combination of three liver-protective properties, formulated for optimal absorption

Each of the three ingredients of Thorne's S.A.T. supports good liver health. Silymarin (milk thistle) contains important antioxidant constituents that protect liver cells from free radical damage, strengthen liver cell membranes, and help maintain the liver's own built-in antioxidant system. Artichoke (Cynara scolymus) has a long history of use for hepatic support. Turmeric has been used traditionally in both Chinese and Ayurvedic systems of medicine to support liver function. The primary efficacious agent in turmeric is curcumin. S.A.T. offers both silymarin and curcumin complexed to phospholipid compounds (as Siliphos and Meriva, respectively) to optimize their absorbability and hepatoprotective effects.

For centuries, Asian cultures have benefited from the healthful effects of curcumin, the orange pigment in turmeric (the primary ingredient in curry). Curcumin is a potent antioxidant that offers numerous health benefits, including support for joint, liver, GI, and cardiovascular function by helping to maintain the body's normal inflammatory response through the optimization of cytokine production. Cytokines play an important role in the body's natural immune response to inflammation, infection, and trauma. Curcumin's hepatoprotective activity is likely due to its strong antioxidant activity and potential to maintain the body's normal inflammatory response in the liver.

Whether taken as a supplement or obtained from food, curcumin is normally poorly absorbed into the bloodstream. Utilizing a unique curcumin formula based on Indena S.p.A.'s proprietary "phytosome" technology, a curcumin extract/phospholipid complex is significantly better absorbed than are stand-alone curcumin extracts. Because phospholipids are essential components of human cells, phospholipids obtained from food or nutritional supplements are very well absorbed.

Three flavonoids comprise silymarin. Of the three, silybin predominates and is the most biologically active. Siliphos phytosome provides the benefits of silybin and phospholipids in one compound. Silybin is naturally a water-soluble flavonoid, but it is made lipid-friendly by being complexed with phospholipids. The result is that the phytosome preparation achieves better incorporation of this liver-protective flavonoid into liver cell membranes. Studies indicate this silybin-phospholipid complex provides superior absorption compared to conventional milk thistle products.

Take 1 capsule two to three times daily or as recommended by your health-care practitioner.

Tamper Evident: Use only if bottle is sealed.

If pregnant, consult your health-care practitioner before using this product.